10 Legendary Thai authors and their works

10 Legendary Thai authors and their works

In the past 10 years, quite a number of well-known Thai authors have died, leaving behind valuable literary creations which have influenced society and readers. Their works remain in the public eye, providing enjoyment, provoking thought, creating inspiration and opening up our world.

We, as dedicated readers who have gained so much from them, want to pay homage to their legacy and give recognition to those who “raised the bar”. So, we have selected 10 of those late writers and with the greatest of respect, we would like to highlight their masterpieces. This list is by no means selective, but rather more representative of the great authors who are no longer with us. 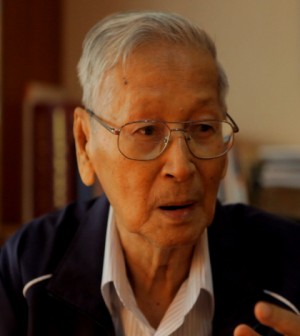 Sakchai Bamrungpong was a diplomat, author and journalist who wrote under the pen-name of Seni Saowapong. He was named a National Artist for literature in 1990. His most outstanding novel is Pee-sard (The Ghost). Written in 1953, it did not become popular until after the Oct 14, 1973 uprising, and it had a profound impact on student activists. Pee-sard criticises the feudal system and old values in Thai society and is told through the eyes of the main characters Sai Seema and Ratchanee who represent new-generation Thais. The pair wants everyone to be treated equally, regardless of their family background, and to be the masters of their own destiny. Sai Seema’s comments at the end of the book are challenging and a clear reference to the book’s title.

Rong Wongsawan, a.k.a. the “great eagle” of local literary circles, was honoured as a National Artist in 1995. His versatile works range from novels, short stories, essays, articles for magazines and newspapers, and documentaries to screenplays. He rose to fame after he wrote Pa Concrete (Concrete Forest), a satire about Thai people living in the United States during the golden age of hippies. The novel looks at their behaviour, both “beautiful” and abominable.  Rong is best known for his unorthodox literary style and his breaking of the rules of Thai grammar. He was once accused by some conservative teachers of “destroying” the Thai language. 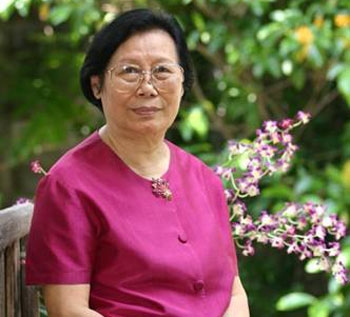 ML Srifa Mahawan, better known by her pen name “Srifa Ladawan”, was named a National Artist in 1996.The writer went by many pen names, including “Chunlada Phakdiphumin” and “Seefa”, using them to adorn more than 100 novels and short stories, as well as intriguing documentaries about the lives of noblemen in palaces. Many of her novels, which depict social ills without making judgments, have been made into TV soap operas and movies. Some have been translated into Japanese through the Toyota Foundation. Srifa’s most acclaimed novel is Kamin Kub Poon which portrays the struggles of the ruling class in the post-1932 Siamese Revolution leading up to WWII. 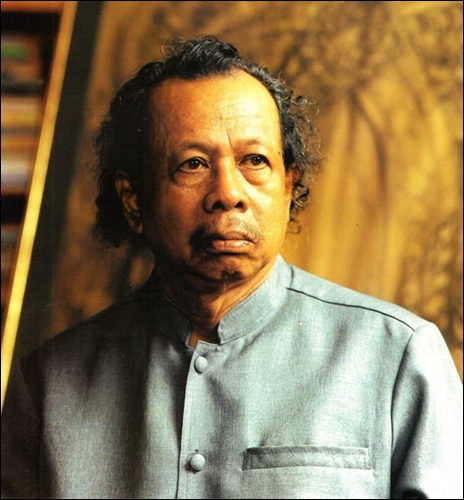 Dubbed the greatest poet of the Rattanakosin period,Angkarn Kalayanapong was a gifted writer and painter. The Nakhon Si Thammarat native gave birth to modern Thai poetry and his creations encourage people to rid themselves of foolish ways and seek wisdom in their lives by learning from nature and the Dhamma. Angkarn’s poetic style is unique in terms of his verbal acrobatics, his intensity, and the richness of the language. Often, he refused to be restricted by traditional poetic patterns and conventions. Angkarn was named a National Artist in literature in 1989, thanks to his popular book Kaweenipon Kong Angkarn (Angkarn’s Poetry). He won a Southeast Asian Writers (SEA) Award in 1986 with Panitharn Kawee (Declaration Of a Poet). 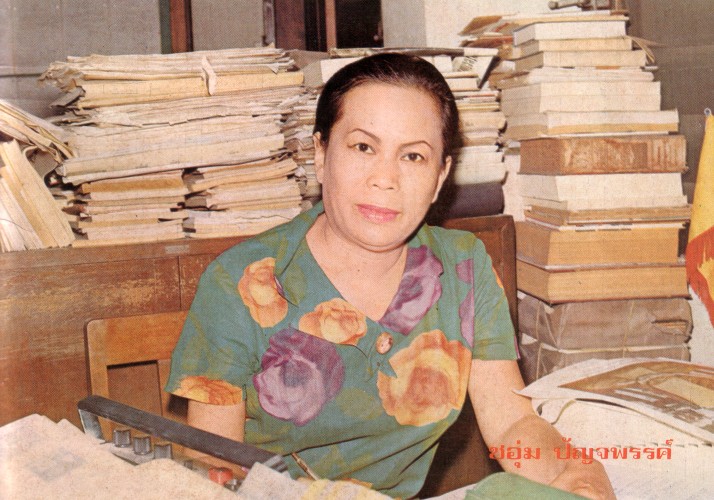 Cha-oom Panjapan, also known as Cha-oom Yamngarm, was a screenwriter for TV and radio soap operas, a book editor and a songwriter for “Soontharaporn”. His works were published widely in now-defunct magazines dating back to the ‘50s - Satree Sarn, Sri Sabda, Mae Ban Karn Ruan and Sakul Thai may be remembered by many. She received the Narathip Award in 2003 from the Thai Writers Association. Her fame was capped with the novel Tad Dao Bussaya, which has been made into a TV soap five times.

Vanich Charungkit-anan’s literary skills are vast and his writing prodigious, covering poetry, short stories, novels, screenplays, children’s books and documentaries. He even wrote scripts for Lakorn Jak Jak Wong Wong, the low-budget pre-Rattanakosin period melodramas based on folk tales which have been aired on Channel 7 on weekend mornings for several decades, with the audience comprising mainly rural folk. This earned him the epithet “show huay writer” to recognise his versatility. Show huay is a Thai expression that describes a small traditional grocery shop. Vanich received a SEA Write Award in 1984 for his short stories book Soi Diew Kun, which portrays urban lives in various aspects. His best-known novel is Mae Bia which has been made into several TV soaps and films. 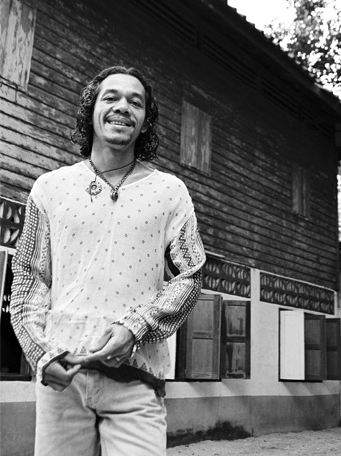 Kanokpong Songsompan is another literary adept. The 1996 SEA Write winner gained fame with his great short stories book Pan Din Uen (The Other Land). He was the youngest member of the Nakhon group, which promotes southern art and culture. Although Kanokpong’s stories largely reflect the lives of people and culture in southern Thailand, his home territory, their themes are always contemporary and universal, touching levels of individual, family and society. Kanokpong is recognised for having produced the highest number of short stories published in magazines between 1988 and 1990. He also created an interesting phenomenon in Thai literature for creating short stories that were longer than average. He was given awards for two consecutive years by the prestigious institution Cho Karaket for two critically acclaimed short stories - Sapan Khad (The Broken Bridge), published in 1989, and Loke Bai Lek Kong Salman (The Small World of Salman), published in 1990. 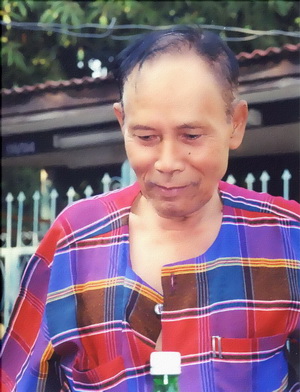 Kampoon Boontawee is Thailand's first SEA Write winner and a 2004 National Artistlaureate. His short stories, novels and documentaries identify with the people of the Northeast, where he grew up, and their beliefs. His highly acclaimed novel Luk Isan (Son of the Northeast) portrays the hard life of Isan people in remote areas as seen through the eyes of an innocent child. This novel was selected by Thai scholars as among the 100 good books recommended for Thais to read. It has been translated into several foreign languages, including English, Japanese and French.

The 1991 National Artist, aka Rapeeporn, is renowned for his short stories, novels and plays, and he also dabbled in journalism. Having penned around 90 novels, Suwat’s works are praised for offering deep perspectives on people’s lives and the world, while focusing on universal problems and not being bound to any society in particular. He is one of the pioneers of Thai theatre, working as a playwright, director and producer. He also founded a theatre troupe, “Choom Noom Sinlapin” (Artist’s Assembly). His most recognised novel is Look Tart (The Son of a Slave), set during a time when Thailand permitted a slave system. After the Oct 14, 1973 uprising, Suwat’s interests turned more toward novels relating to politics and social problems.

Karuna Kusalasai, named a National Artist in 2003, was a journalist, philosopher, translator, and an expert on India, Hindi and Sanskrit. He began writing when he was ordained a novice monk, and his essays were published in magazines and newspapers. Karuna translated The Discovery of India, written by India's first prime minister Jawaharlal Nehru, and became regarded as Thailand’s foremost “expert in Indian studies”. As well, his translation work has helped to provide insightful information about those interested in South Asia study. Another acclaimed translation work from Karuna was Gitanjali, written by Nobel Prize laureate Rabindranath Tagore.

Blog On the Bike Based Learning