Will books survive as libraries turn the page in the digital age? 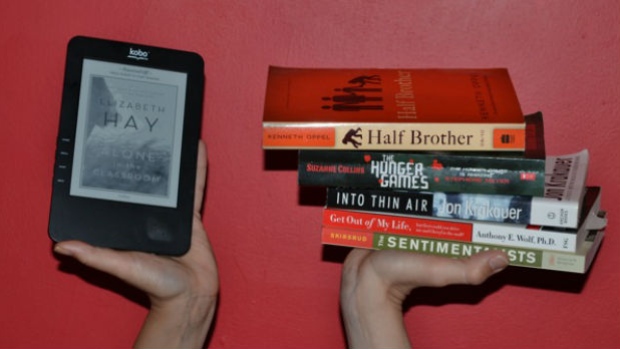 "We're going to see more and more electronic books because they are easier to distribute, there are fewer book stores, and it's easier for publishers to get to their marketplace," says Ken Roberts, a specialist on library and technology issues. (CBC)

You might think that with the growth of the Internet and the rise in e-books that libraries might become obsolete.

However, it turns out that libraries are simply changing to meet the new reality.

Ken Roberts is a specialist on library and technology issues. On April 28 he is giving a lecture called The Future of the Book.

The phrase he talks about is 'the emerging second generation of electronic books'. This simply means that every major technology influences the product that is out there already. And it's no different with e-books.

"We're going to see more and more electronic books because they are easier to distribute, there are fewer book stores, and it's easier for publishers to get to their marketplace," he explained.

As far as how this fits in with libraries as they are today, Roberts says there will still be book stacks in libraries.

"The book will still be there and many people will still want to read that physical book that's there," he maintained. "But much of the library space will also be devoted to other ways of encouraging creativity and self-discovery."

One cutting edge form of technology is called Makerspaces.

"They use the new maker technology where instead of printing something on a piece of paper, you can print a 3-D object," Roberts explained.

How has all this affected libraries? Roberts has been working as a librarian for four decades and he sees library usage increasing.

Roberts has witnessed innovations in places further afield, like Northern Europe. He says that what we see as being innovative, they see as being normal.

"In Denmark for example they have about 50 public libraries where you can use an access card. You can go in when the library is not open and check out material then sit down and use a computer," he described. "Then at about 10 o'clock at night the lights start to dim and people leave."

"In Sweden they have a Discovery Centre where people can bring projects in to the library and staff help them to use the software, use the scanners, use video or music editing and put their project together."

Ken Roberts is a member of the Royal Society of Canada's Expert Panel on the Future of Libraries and Archives in Canada. He is speaking on the emerging second generation of electronic books at the Millennium Library in Winnipeg on Monday, April 28, from 7 to 8 p.m. in the Carol Shields Auditorium.