Get started on the Startup path to your dream 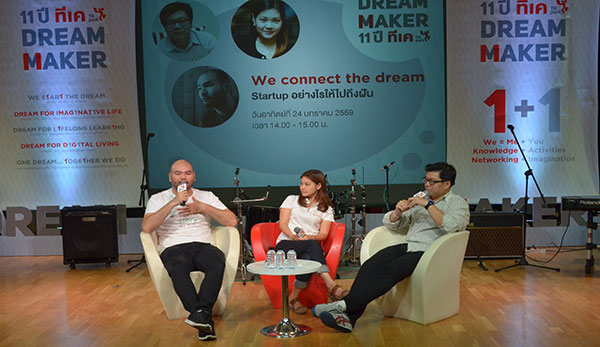 With a trend of people in Generation Y (Gen Y) who were born between 1980 and 1997 and try to break out of boredom working rules such as salary man, they then try to create change or something better with their own efforts by investing in business or working freelance. This concepthas led to another path which can make dreams of Gen Y people come true, called “Startup”, a new business model which now gains high popularity among business people. Aside from fundraising patterns which allow investors to not contribute all of their money, Startup can also produce quantum leaps in business as well as create change to the world.

However, to achieve the dream is not easy as Startup risks to end up with failure than success. Therefore, learning right approaches for Startup from veterans is very necessary.

To mark the occasion of the 11th anniversary of TK park, a forum on How to Achieve Your Dreams with Startup was held as part of activities in 11th Year TK park: Dream Maker. The event featured guest speakers from Techsauce, a team comprising of several Startup experts such as Charath Petchthongchai and Oranuch Lerdsuwankij. In the forum, they also discussed Startup issue with Pramewith Seechartwong, founder of Storylog website, another form of Startup which allows people to share their stories and inspirations through text formats on a creative space. All approaches to succeed in Startup given by the guest speakers are also provided as follows:

Why is Startup popular?

It could say that Gen Y people grew up in an era of pursing their dreams. The media has always instilled a concept of “achieving your dreams” into them. Idols of previous generations could be well-known tycoons. But today Gen Y’s idols could be Steve Jobs, Mark Zuckerberg and Itthipat Peeradechanpan, known as “Top” Tao Kae Noi. These people have courage to get started on something new and succeed them with their own efforts. Their achievements result from the world which is more receptive on new ideas enabling people to not follow the same rules. Another factor is that today there are many more business opportunities comparing to the old days.In the past, if people wanted to open a shop, they had to pay rental fee to landlord. However, nowadays people can do online marketing by postingpictures of their products on social network.In fact, people in the past also wanted to have their own business. However, they would do that on condition that they had moderate experience. This practice subsequently leads to a question, “Why I have to do this? I think this way is better”. The survey indicates that 70% of Gen Y or “Millennial” overseas want to have their own business than the older generation since they do not want to have superiors and subordinates. Also, they can operate business on their own fuelled by two crucial qualifications: passion and courage. Additionally, over the past few years, the word “Startup” is prevalent in business world. Therefore, the new generation people possibly view this type of business model as a tool to help them achieve their goals.

A concept of Startup comes from when we face obstacles and want to get through them, not online marketing. Startup is not only ways to address problems, but how people will be able to generate incomes from solutions as well. Startup will focus on finding solutions for users and also their business growth. For example, GrabTaxi is one of the successful Startup businesses initiated from the needs of people who have tooften commute by taxi. Passengers always concern over their own safety so they want to find a primary approach to guarantee they will be safe if they are on board with taxi drivers.Also, another problem is that taxis who deny customers who flag them down. All these problems persist until one day there are a group of people proposesa solution to these matters by launching an application which enables passengers to call taxi service.

Another example is that people always have problem with finding lunch. Thus, Wongnai, an application recommending restaurants nearby users, is also introduced to the public. Restaurant owners can upload their information on the application while customers can also share their comments on foods and restaurants.

As for Storylog which performs as a space to allow people to share their stories, the website was inspired by Mr. Pramewith’s passion for writing. A pattern of the website is designed as simple as possiblein order to attract people who are fascinated in writing to the website. Their works will be stored properly in an effective database system. Stories can also be shared among other people. Storylog’s practice is different from Facebook in which their posts will disappear from news feed when time has passed. This limitation makes it difficult for Facebook users to restore their previous stories. With all three examples, they prove that Startup does not have to be great things or international-level issues. But, Startup can be generated from simple problems in which if there are proper solutions, everybody is willing to use them.

Where does the idea of Startup come from?

In the early stage of Startup, the first crucial process is to find an idea to create a product. The initiated idea can be separated into three patterns:

Most people always mistake the third type of the idea. For instance, Facebook is not the world’s first social network. Earlier, there were Hi5 and My Space but Facebook is the only social media which remarkably gains popularity among netizens. Even though Facebook is not a new idea, its functions can meet satisfaction of users the most. In foreign countries, there are also ideas which are similar to Wongnai. Therefore, people can also explore ideas overseas and study their possibilities in Thailand. If they can crack the code, they will be able to successfully build something which meets the needs of customers as well. This approach is not an imitation but adaption and developmentof ideas so they will be applicable to our country.

Keys to a successful Startup

As Startup business is not doing everything all by yourselves, it is necessary to find team members to serve in various positions such as programmer, marketing personnel, designer and accountant. This approach is similar to setting up a small-sized company.

A problem that many people who launch Startup always face is to find“co-founder”. Based on Mr. Pramewith who was on his own during his fledging Storylog website, he started to look forhis co-founders by meeting with other people in several Startup events, called Startup Weekend, which gather people armed with various degrees of expertise. These events enable strangers with a common interest to meet each other. In the event that they are interested in the same type of business, they can jointly work to develop and materialise their projects. Besides, co-founders can also be found in a co-working space, a modern-style working place for Startup people.

Mr. Pramewith said finding co-founder is harder than finding a girlfriendbecause people can break up with their pals if their relationships are not working. With co-founder, on the contrary, they have to work closely together for a long time. In Mr. Pramewith’s case, he took more than a year to find a suitable team of co-founders. Although each individual will have their own specific expertise, other team members who are adept in other fields are still required because concepts of products must be agreed among co-founders first before selling them to clients. This way willhelp forge solidarity of the team which is very important increating a piece of work.

Fund isalso a key factor in operating business. However, with Startup, founders are not necessary to put all of their money in their businessas they can rely on two types of funding sources: Venture Capital (VC) or major investors and Angel Investor, independent investors who can accept high-risk investment. However, beforeeach Startup business will obtain these funds, they have to undergo “Pitch Idea”, or selling business ideas to investors by persuading them that our businesses are worthwhile investment as it can generate profit and growth. This stage is very important for products which are unable to generate incomes in their early stages. The process can also compare to telling other people our passion that what we want to do and future prospects ofbusinesses.

If anyone has the opportunity to study Startup seriously, they will find that even though revenues from Startup have been increasing to several million baht recently, in fact 95% of all Startup businesses failed. Therefore, founders of Startup businesses should not focus on profits in the first place. Instead, they should work hard to create fine products in a bid to meet satisfaction of customers first. After receiving good feedbacks from customers, investors will offer funds to Startup businesses which will be followed by big incomes,respectively.