เว็บไซต์ TK Park มีการใช้คุกกี้ เพื่อเก็บข้อมูลการใช้งานไปวิเคราะห์และนำไปสู่การปรับปรุงการให้บริการที่ดียิ่งขึ้น ท่านสามารถเลือก ยอมรับ หรือ ไม่ยอมรับ (อ่านเพิ่มเติมได้ที่นี่)
ยอมรับและใช้งานต่อ
We are sorry. The content is not available in the selected language. Would you like to continue?
Cancel
OK
Back 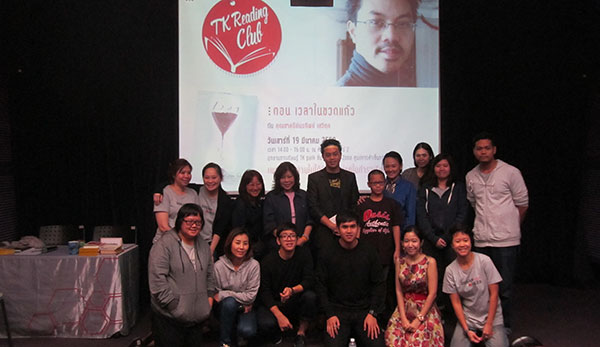 TK park invited book lovers to join TK Reading Club’s latest book talk event with the episode name “Waela Nai Kwuad Kaew” (Time in a Bottle). Waela Nai Kwuad Kaew is the name of a famous novel written in1985 by the late National Artist in literature and renowned writer Prabhassorn Sevikul. The novel is so popular that it has been reprinted almost 40 times and was named the best book for children and young adults of 1998 by National Federation of Association and Institutions for Development pf Books and Reading Habits (NFAID). Waela Nai Kwuad Kaew has been translated into other languages and made into TV series, a film and a play several times. During his 40-year career, Prabhassorn penned  more than 60 novels, 150 short stories and 200 poems, with themes ranging from teenagers to power-greedy politicians.

The event featured Prabhassorn’s son and his wife, Chakreenornthip “Golf” Sevikul and Chutima Sevikul, respectively, as guests and it was well received by the book lovers.  Below is an excerpt from an interview with Golf and Chutima.

In what way has this novel impressed you?

Golf : Waela Nai Kwuad Kaew is my father’s masterpiece novel which made him become widely known. It tells the story of a group of teenagers including Nut, Ning, Pom, Jom, Chai and Ek, who try to go through personal and social problems; their friendship; and family bonds. The story is told by the point of view of Nut.   A major political incident is also included in the story.

There are three things I am impressed about this novel. First, the way my father neatly chose his words to convey his thoughts and, as a son, I felt proud of him. Second, as a reader, I was impressed that the story can draw me into its world. I read this novel when I was 14 years old and studying at a boarding school in New Zealand. My parents gave it to me before I left for New Zealand and suggested me to read and try to translate it into English whenever I miss my home in Thailand. Third, I think the book is a good writing guidebook for teaching wannabe writers on how to make readers feel attached to characters and stories in it.

Golf :  The charm of this novel is the tangible relationship among family members while the social problems portrayed in it are the ones that actually happened in our society. The author reflected those problems without pointing the fingers at anyone but he told us that friendship may help solve these issues.

Another charm is that when you read it again at different ages, you still get new perspectives and experience every time. I mean when you are in high school and read it for the first time family, you may not understand why some parents don’t have time for their kids. When you become a working-age person and read it for the second time. Or have your own kids and read it for the third time. The book will remind you that, as a parent, spending time with your children is very important.

Chutima : There are different types of love in this novel, be it love between friends, brothers and sisters, and parents and their children. Nut really loves his younger sister but he feels guilty not being able to look after her well enough. Nut’s mother hates her estranged husband and tries to convince her children to hate him too. But the couple still help each other after Nut got into big trouble—getting busted by police. Series of events in the story are driven by love, something indefinable. Every character has love to give and share. “Love, Friendship and Hope” are the novel’s main themes.

Golf : The novel reflects oppression and exploitation of the underprivileged which still exist in our society today. It also reminded us of family problems. How divorce can affect the children emotionally and psychologically. These matters are still everyday problems and this makes the book timeless.

Social impacts on the lives of the characters

Golf : I’ve talked to the readers and many of them said the problems the teen characters are facing are terribly serious and big for them, such as the divorce of parents, teenage pregnancy, abortion. If a writer as well as my father does not write about them, he or she will have swept the problems under the carpet. My father simply allows readers to see the characters grow up amid numerous problems in their lives. The novel may not tell where we should begin solving the problems because, in fact, some problems may be unavoidable such as parental divorce. But it tells you how you can deal with these problems and go through them.

The book indirectly tells you that when you have life problems you don’t have to drink booze or take drugs — because you still have other options — if you have true friends who are ready to deal with the problems with you.

Chutima : The novel partially refers to Thailand’s political mayhem between 1971 and 1973. Khun Prabhassorn wrote about it when the dust has settled and things have become crystal clear. No one dared mentioning it at that time. So one can say this novel is kind of historical record and demonstrates the author’s bravery. Khun Prabhassorn tried to summarise the series of political events without finger-poinitng. This is often the characteristics of his novels.

Besides, teenage boys in Waela Nai Kwuad Kaew had to take on several personal problems. When Ning was pregnant, her brother Nut decided to take her to an abortion clinic. It showed an immature decision. Some readers wonder why he had to take his sister to the abortion clinic. But one must keep in mind that these characters are just teenagers and teen pregnancy and abortion remain today.

Billionaire Vikrom Kromadit [founder of SET-listed Amata Corporation] once said “teaching teenage boys to be more gentlemen” was a way to help reduce teen pregnancy because it took good people to make a good society.

Golf : Books are a good tool to explain the complexities of human relationships. Life is a difficult affair, but if there’s something that may help us learn to avoid life’s problems, that should be a book.

Kor Mon Bai Nun Tee Ter Fun Yarm Noon (May I Have That Pillow on Which You Dream While Sleeping?) is another recommended novel by Khun Prabhassorn. It tells the story of a young man named Long Jun who was a middle child in a debt-ridden family. His father thought his birth had brought bad luck to the family and blamed him for the family financial crisis. Long Jun had to prove himself against negative prejudices and hostility. Sing Tueng is also an interesting work. It’s the story of a teenager who faced and finally overcame life's many challenges although he had been lured by sinful, mundane temptation and immoral environments.

Chutima :  Besides Waela Nai Kwuad Kaew which is one of the popular books for university students, I recommend The ASEAN Literary Series which contains  fictional stories based on historical anecdotes of ASEAN countries. Readers will get to know neighbouring countries better while the  book can also be read for pleasure. There are 10 stories in it but three more stories will be added. Golf and I are working on it.

In this book, I want to recommend a story titled “Ja Fun Tuang Ter Took Kuan Tee Mee Sang Dao” (I Will Dream of You Every Starry Night). It’s the story of Indonesia under Dutch rule, during World War II, and during the Suharto era, told through the life of a Thai boy and an Indonesian girl and their unbreakable friendship. The character said: “I will dream of you every starry night”. The story also refers to the construction of the “Death Railway” in Thailand by prisoners of wars including those from Indonesia, who were captured by Japan’s Imperial Army.

Stay tuned for our next book talk event on Luk Isan (Son of the Northeast) by Kampoon Boontawee in March!

“There are more books you should read besides your textbooks”