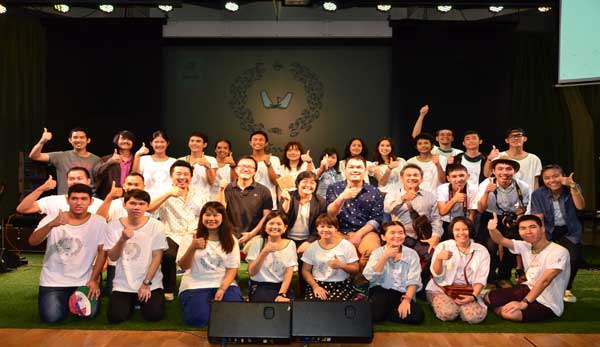 For five years, TK Band has helped to expand the scope of learning under TK park by welcoming young music lovers into the fold and giving them the chance to glean knowledge from some of Thailand’s most talented musicians. Popular and exciting, this initiative has created a new “home” for young people as they develop their skills and embark on a long musical road.

With the backing of TK Band, aspiring young musicians are given the rare and coveted chance to create their own album. Musician Su Boonliang was invited to be the first album producer, and he has stayed with the band ever since. This year’s album is titled Ban Ban (Home Home) and revolves around the idea that a house is where one’s body rests, while music is a shelter for one’s soul. TK Band youths want their listeners to think of themselves as family  members.

On 18 October last year, the fifth generation of TK Band showcased their ability and what they had learned at a mini-concert to launch their debut album, Ban Ban, at TK park. Before the concert started, guests were served with home-style snacks and desserts along with lemongrass drinks and iced milk tea to make them feel “at home” and in tune with the concept of the album.

When a new generation of TK Band gets underway, the first phase involves a workshop that lasts three weeks, and offers lectures and training sessions on various topics delivered by guest speakers. TK Band 5 was privileged to work with:

Assignments are given on a weekly basis throughout the three-month workshop. One of them was to change the lyrics in Happy Birthday while retaining its melody. Although the task was quite tough for the youngest, all of them did well.

Apart from the schooling at TK park, the young fifth generation members were taken on an excursion to Ratchaburi province where they were split into five groups to visit major production sources of woven fabrics, chai po (salted radish), coffee, pottery and wax figures. Each group was told to thoroughly absorb everything they saw and try to understand the philosophy of the manufacturing processes. They were then asked to sift through the raw material they had gathered and the experiences they had obtained from the trip to create lyrics and melodies.

For example, a song named “Nai Tuay Nan” (In that cup) was written after one group witnessed how a coffee manufacturer paid meticulous attention to detail, from seed selection to the moment coffee is served in a cup, and how much love he had for his product. Another song, called “Tee Hang Nee” (At this place), was the result of a visit to a wax museum at Siam Cultural Park in Bang Pae district. The song is about boredom and fatigue in one’s daily life and how happy one feels when they get back home.

All of the youngsters contributed to every song on Ban Ban, from gathering raw material to composing the lyrics and creating the melodies, and they can be proud of what they have achieved.

The fourth generation of TK Band also appeared on stage on 18 October at TK park, highlighting the fraternity and devotion each young member has to their extra-curricular studies. Kongyos Wongwigkorn, album supervisor and guest speaker for the project, praised the young participants for their enthusiasm and determination.

“All of you who have attended this project are fine young people. This is a good start for you to help you to pursue a career in music or to get involved in other things related to music.”