The monthly Film Series, entitled ‘Contemporary World Film Series’ was very popular at the Foreign Correspondents Club of Thailand (FCCT) for nine years, and now, moves to TK park. The film events, supported by various Embassies, will be held on a ‘Saturday’ of every month, from September-December 2016. We are honored that the Ambassadors will be present, to introduce the movies. 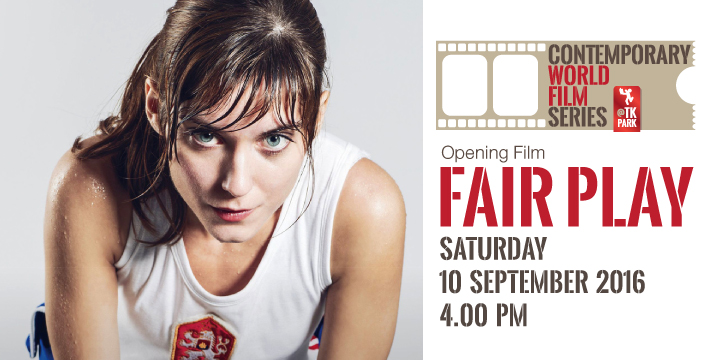 Opening Film  ‘Fair Play’ (Czech Republic), 100 mins, 2014, directed by Andrea Sedlackova, is a sports-movie, as 2016 is the year of the biggest sporting event in the world- the Olympics. In keeping with a subject that created waves at this year’s Olympics held in Rio, Brazil, the subject of the Opening Film, is ‘doping’ in sport.

The story is set in 1983, during the Socialist era in Czechoslovakia, when a talented female athlete Anna, is being groomed to participate in the Los Angeles Olympics. She is put on a ‘secret medical program’ where her coach is ordered to give her a performance-enhancing steroid, to improve her performance. When it has uncomfortable physical effects on her body, Anna refuses to take them. That’s when her mother is ordered to administer the steroid to her, under the pretext of ‘vitamins.’

The mother agrees, as her own sports-career had been ruined, since she had been a political dissenter. Besides, her husband had emigrated to Germany. So, she is ‘under watch’ by the authorities. That’s why she wants her daughter to go abroad, through her sport, and live a free life there. But it’s not as easy as it looks, especially as the daughter falls in love, and the mother helps a political dissenter.****

The film asks many questions, moral, political, personal, under the guise of Sport. It also deals with the subject of emigration, which is a global issue today. The movie was screened at many film festivals around the world, and was the Czech Republic’s Oscar-nominee in 2014. ‘Fair Play’ is a strong, moving, and highly topical film, to launch the ’Contemporary World Film Series’ at the TK park.