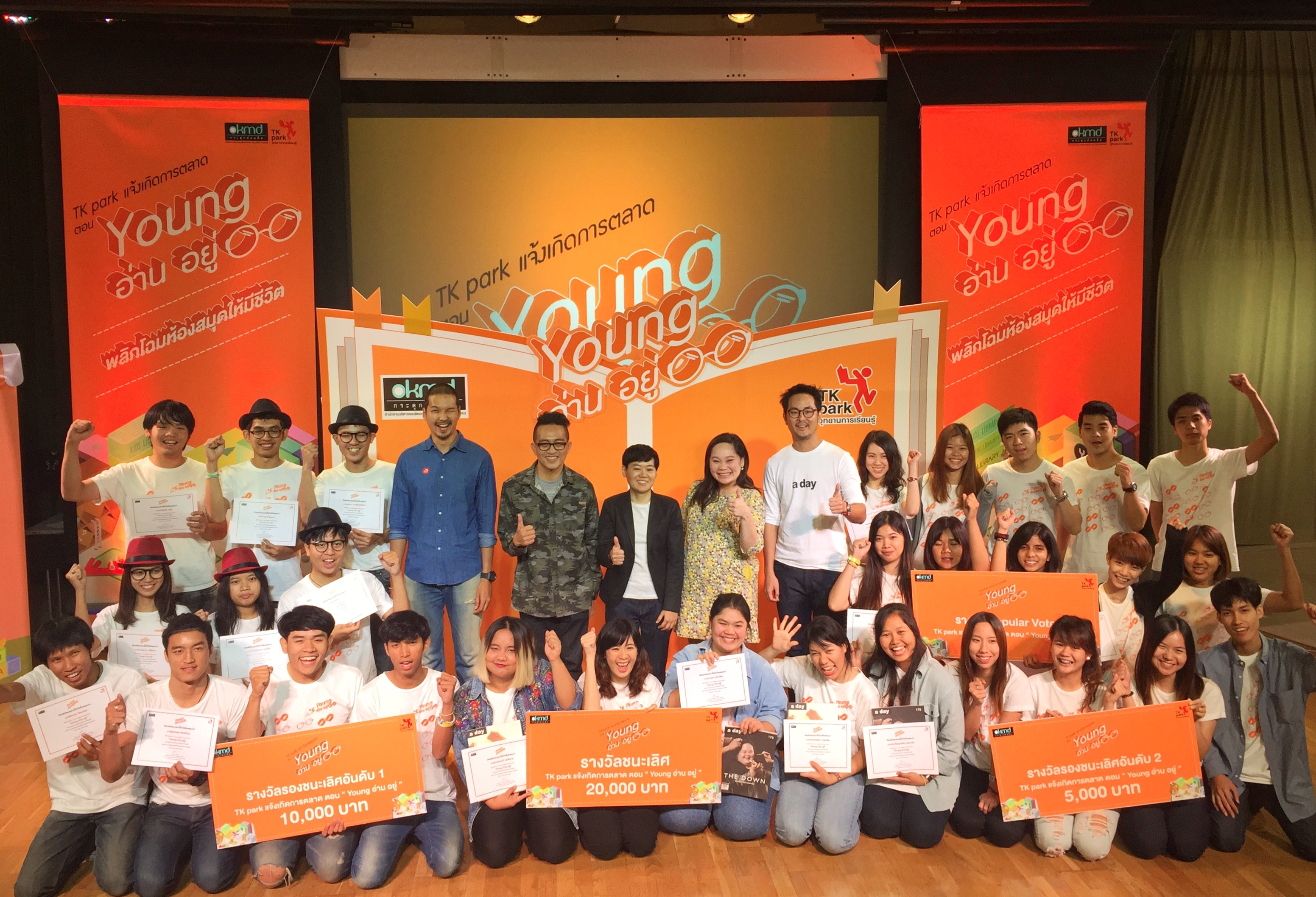 “TK park Jang Kerd Marketer: Young Readers Episode” project was launched to encourage university students to propose creative activities that can enliven a children’s library, a music library or an IT library. With a 100,000 baht scholarshipup for grabs, it drew a lot of attention, and six teams were shortlisted to attend workshops and turntheir ideas into action.

Now we have the winners list. The first-placed team is “Young Ngai Kor Dai” from Srinakharinwirot University. These students proposed a learning activitycalled “Yoga Tale” - teaching yoga through story-telling techniques. The activity was designed to be fun and strengthen relationships between young people and families.

Second-place was shared by Chiang Mai University and Mae Jo University. The students proposed “The Gift”, an activity which conveys a message that a book can mean more than a gift. The team made a short film and invited viewers to donate a book in exchange for a movie ticket. They then gave the donated books to a rural school in Lamphun province.

In third-place with “Just Play”was King Mongkut's Institute of Technology Lat Krabang. Its students came up with an activity called “Just Play: Creative Voices Creation”. The team incorporated sound effects into a story-telling and asked participants to guess what made the artificial voices.

The “Half Past 4” team of Burapha University grabbed the Popular Vote Award with their “Play Plearn Learn Read into the Ocean Book”. The Honourable Mention Award went to Chulalongkorn University’s “Nippa Na Nippon” team who introduced “Finding Readers”, a snakes and ladders game in which players were required to read necessary information to help them pass hurdles in the game. The same award went to team “New Dimension” of Naresuan University for their “Mystery” activity in which participants were taken into the realm of crime fiction tosolve a crime in a locked room. 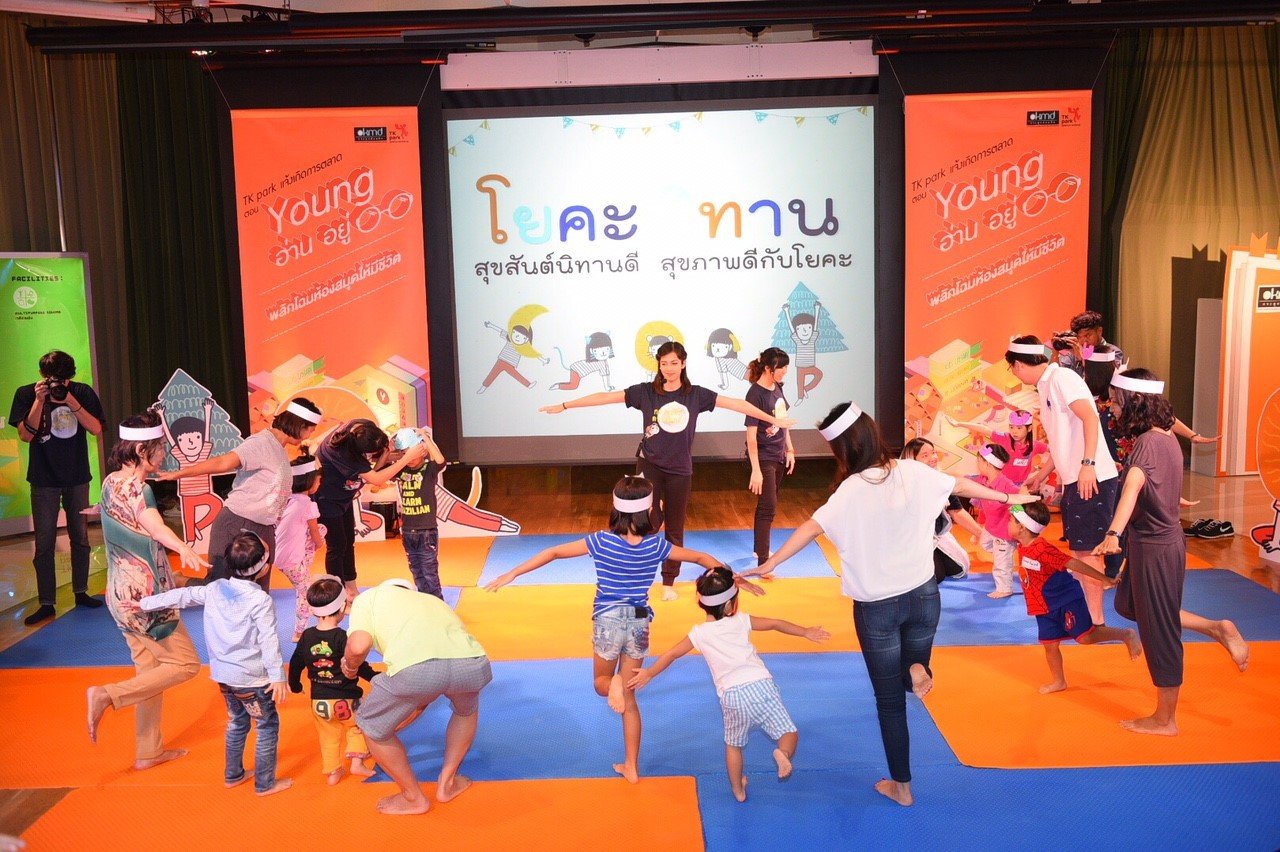 Daranee Torpimai, one of the Young Ngai Kor Dai team members, said she was pleased with the effort and thanked the committee and all participants for admiring the Yoga Tale activity. The student from the faculty of humanities described the “Yoga Tale” library as a mixture of story-telling and simpleexercises whilebook content still had a role. She contributed the team’s success to the study of children’s literature as a major and the ongoing fitness and wellness trends. “Our team has an understanding of children, what they are interestedin and parents’ participation. Also I’ve been doing activities with kids since I was a freshie and this is probably our strong point,” MsDaranee said.

“I hope TK park continues to organise this kind of activity because it helps to foster a reading culture. I encourage younger students to send in their ideas as this is a good project. They will get good experience, fun and a lot of advice from the [TK park] staff which they can adopt.”

Nattawut Paolimlee of Chiang Mai University’s education faculty said the film in “The Gift”was inspired by a Karen boy he met while working on a short film about thelife of ethnic Karen. He said he asked the boy what he wanted to be when he grew up and he was told, “I have no dream”. 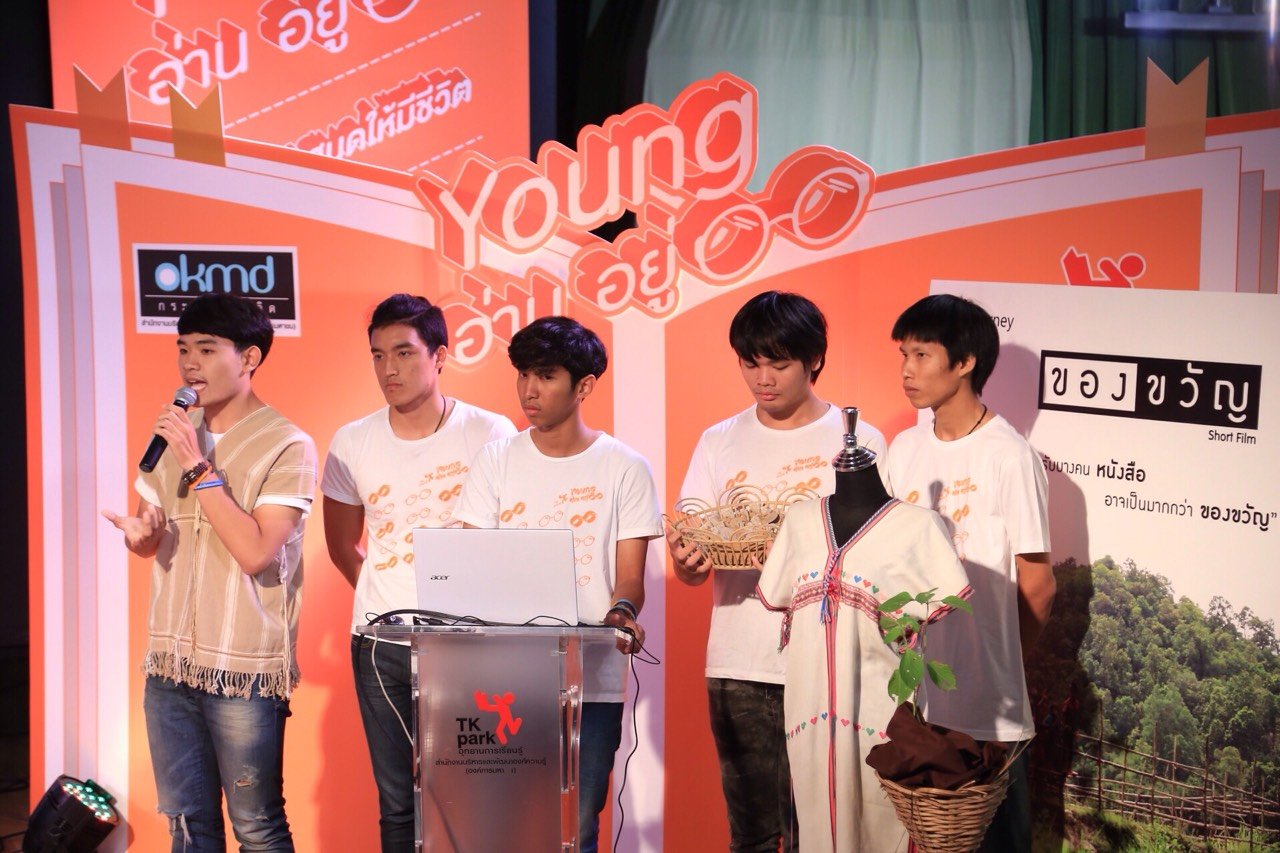 “He just wanted to do what his parents had been doingand that is collecting food from the forest. He made me think that his world is still small and the library up there has very few books,” Mr. Nattawut said.

“So I think reading can help to open up his world, making him know there are many more jobs he can do if he wants to. And that was how books became the main theme in our movie, which is a ‘library without walls’.”

Mr. Nattawut added that taking part in the “TK Park Jang Kerd Marketer: Young Readers Episode” project made him value more the importance of teamwork, and winning an award was beyond what he had expected. He believes reading through any media platform enhances skills and opens up people’s world.